Unfortunately I don’t have a punch line. But I do have a scenario. So two new players walk into your casino — Alison generates $600 in theo but loses only $200, while Betsy generates only $200 in theo but with some bad luck, loses $600 real dollars. Long-term, who is likely to be the more valuable customer?

I pulled some data on a group of players whose first visit was similar to the above. The Betsys had high actual losses but low theos (minimum 3x ratio), while the Alisons generated high theos but only lost a small amount, or even won some money. I focused only on players between $250 and $1000, to prevent a handful of very high worth players from dominating the data. Over on the right, you can see what the two groups look like, graphically. 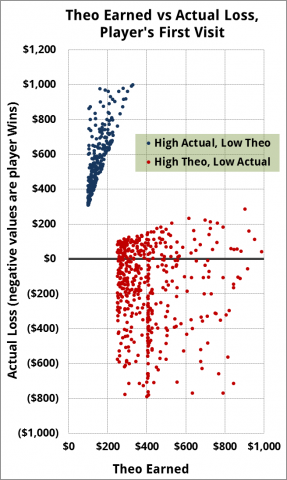 There were about twice as many Alisons, however the graph makes the ratio look even larger. Because theo can’t go negative, the Betsys (in blue) are much more concentrated on the graph. Alisons are more spread out since the actual loss, on the y-axis, can be anywhere from +200 to -800.

All the players I looked at had their first visit between January and June 2012, giving them a full 2 years to establish a visitation pattern and gaming history. Here is the comparison of the two groups over the next 2 years:

Surprisingly (to me, at least), the high theo / low actual group (the Alisons) turned out to be worth more long-term, primarily because they are more likely to return and to visit more. 87% of the Alisons returned vs only 69% of the Betsys. Even after eliminating the non-returners, Alisons have returned 22.6 times vs 17.7 visits from the Betsys. The additional trips give the Alisons a huge advantage.

On per-trip spend, the results are a little bit more mixed — the Alisons (high theo on first visit) continue to generate far more theo on future visits ($174 vs $142) but the Betsys (high actual loss on first trip) continue to lose more actual dollars ($138 to $120). You may have noticed that the Betsys have, on average, a very small gap between their actual and theoretical losses ($4) while the Alisons have a much larger gap of $54. This indicates that the results of the first trip weren’t entirely due to good luck and bad luck — the Alisons, who generated high theo despite not losing much, continue to generate a lot more theo on subsequent trips. This indicates a playing style — perhaps a lot of video-poker or low-hold slots, more max betting, etc. — that tends to generate more theo than actual losses.

There’s another important factor driving these differences, however, and that is the marketing to each of the two groups. Whether your casino utilizes Avg Daily Worth or some other method that attempts to include actual wins/losses into the equation, theo is still the dominant marketing measure. I would guess that every casino in America would have sent more generous offers to Alison, based on her $600 theo, than to Betsy with her $200 theo, even though Betsy had the much larger actual loss. If the Alisons get better offers initially, it shouldn’t be all that surprising that they are more likely to return. Further, the effect tends to snowball — the results seem to indicate that Alisons may be more experienced players, and they know how to lose less of their own money while spending more of the casinos (via free slot play — this helps explain the large theo vs actual gap). So instead of this being a clear example of one group being worth more than the other group, we must consider how much the different marketing to the two groups contributes to the difference in value. A chicken and egg problem indeed.

A wise strategy here, it appears, would be to spend a little more investing in and cultivating the Betsys. When a new player loses a lot more than the theo generated, the casino should base its initial offers entirely off of the player’s actual loss, regardless of theo. We don’t want to allow one class of player to underperform because we are under-marketing. Higher offers are more likely to get the player to return (an abandoned player is worth zero, so it is imperative to get them back), and over time and with more visits to look back upon, offers can be adjusted to reflect their long-term value.